The classical approach to discretizing time-dependent PDEs are timestepping schemes that, given the problem data and approximate solutions for preceeding time steps, compute an approximate solution for the next time step. For long time intervals, approximation errors accumulate over time and hence the time step has to be chosen prohibitively small for the realization of reasonable error bounds, which leads to tremendous computational effort. Spacetime schemes are based on the idea to treat time as a kind of space dimension, and to discretize time and space simultaneously in a Petrov-Galerkin scheme.
The temporal direction of the information flux is reflected in the choice of the test space. In this manner, time-dependent problems can be tackled with coarser time steps, since the approximation error does not accumulate and grow in time direction, but is quasi-optimally distributed in the spirit of a Galerkin approximation.

On August 7–9, the annual Summer School on Applied Mathematics and Mechanics (SAMM) took place at the Leibniz University Hannover, under the topic “Spacetime Finite Element Methods for parabolic and hyperbolic conservation laws”, with 21 participants from Germany, Austria, and the Netherlands. We were very happy to have Prof. Christian Hesch (Uni Siegen), Prof. Jaap van der Vegt (Uni Twente), and Prof. Olaf Steinbach (TU Graz) as lecturers, as well as Dipl-Ing. Julia Hauser (TU Graz) for the programming tutorials.

The start was made by Prof. van der Vegt, introducing basic concepts of space-time discretization for the advection-diffusion equation and compressible Navier-Stokes Equation. Prof. Hesch gave an engineer’s perspective on the space-time approach with emphasis on the historical background, and finally Prof. Steinbach addressed space-time variational formulations in Bochner spaces and anisotropic Sobolev spaces with application to the heat equation and, extending the approach, to the instationary Stokes system. The lectures were accompanied by extensive programming tutorials led by Julia Hauser.

The summer school was hosted by the Institute of Applied Mathematics at Leibniz University Hannover and financially supported by the same and by the Dr.-Klaus-Körper-Stiftung, and the organization and realization was supported by Prof. Sven Beuchler, Natascha Krienen, Tim Haubold and many others. Participants emphasized that they appreciated the atmosphere, size and structure of the group, the time available for programming, and last but not least, the lectures.
As an organizer, I enjoyed the summer school very much as well, which to organize was a very intensive and instructive experience.

The 7th GAMM Juniors’ Summer School on Applied Mathematics and Mechanics (SAMM), organized by Carmen Gräßle and Petar Mlinarić, on

Creating public awareness for science in general but also scientific methods, results, and organizations is an essential task in our current society. We were therefore very excited when we got invited by the Modellansatz podcast to talk about the GAMM Juniors and our newly founded research journal GAMMAS. Thus, in May 2019, we, that is the GAMM Juniors Kerstin Lux and Benjamin Unger, met with Gudrun Thäter from the Karlsruhe Institute of Technolog, who records the pod-cast together with her colleague Sebastian Ritterbusch.

The Modellansatz Podcast tells stories about how mathematics, and more generally natural sciences, enter our everyday life, thereby targeting a broad, and also non-specialist audience. It sheds light on current research topics but also on the personal perspective of individual researchers. Although mathematics is usually associated with lots of formulas, the Modellansatz Podcast offers a different path to dive into scientific mathematics by individual stories of the researchers themselves. For more details about the podcast, we recommend to visit the info page of the podcast.

For us, this was the first time to record an audio podcast, and we were both excited and a bit nervous as well. After everybody was equipped with a microphone, Gudrun Thäter started the recording, and the podcast quickly turned into a conversation about the GAMM, the GAMM Juniors, GAMMAS, and our research interests. After the initial excitement, it felt similar to a coffee break talk, which we are used to from various conferences. For more details about the episode, we recommend to listen to the actual podcast. We thank Gudrun Thäter for inviting us and the friendly atmosphere she created.

Due to the success of the previous two YAMM lunches at the GAMM Annual Meetings in Ilmenau/Weimar (2017) and Munich (2018), the GAMM Juniors have organized the YAMM lunch for the third time, taking place during the Annual Meeting in Vienna in 2019. This event addressed young scientists and established experts working in the fields of applied mathematics and mechanics.

During this year’s YAMM lunch, we have welcomed twelve experts who represent different stages of the academic career path. An abundant buffet was served in the Kleiner Festsaal at the University of Vienna, which created a festive atmosphere due to its rich décor. The lunch started with a short opening by the organizers, who introduced all experts briefly. Afterwards, intensive discussions among participants and experts started. In contrast to the previous years, a specific topic was not selected in advance such that discussions were free to evolve about various topics, such as general experiences in science, career strategies, as well as challenges in academia, such as finding a good balance between work in science and private life. Once again, the interest of participants in the YAMM lunch was very high, i.e. all available tickets for the lunch had been sold out rapidly, such that the GAMM Juniors plan to organize the YAMM lunch for the fourth time during the GAMM Annual Meeting in Kassel next year.

The GAMM Juniors would like to thank all experts taking part in this event, sharing their personal experiences and giving valuable advice, thus contributing to the succes of this events. Many thanks of the GAMM Juniors are also addressed to the local organizing committee for their support during the organization of the YAMM.

The GAMM Juniors were founded in 2012 to strengthen the voice of junior researchers and to support the rejuvenation of the Gesellschaft für Angewandte Mathematik und Mechanik (GAMM). Since then, each year ten new Juniors are appointed for a three year period. The GAMM Juniors are active members in many boards and committees of the GAMM and organize and host various events specifically addressing the interests of junior researchers throughout the academic year, in particular during the time of the GAMM Annual Meeting.

After more than two years of preparation, the new open-access journal GAMM Archive for Students (GAMMAS) is now online and has published its first article: ‘A Resonance Tracking Approach from Adaptive Control‘ by Meike Gierig and Lars Flessing. The GAMM Juniors encourage excellent Bachelor and Master students to submit their research results to GAMMAS. We particularly emphasize that GAMMAS also publishes failures, i.e., methods and tools that do not work for specific problems. To ensure reproducibility of results, all authors are encouraged to submit source code used for simulations along with their manuscript.

During the setup phase, the GAMM Juniors discussed various conceptual detail such as the license type and the review mode and spend a lot of time to create the LaTeX template, the online journal systems, and many small details such as guidelines, the copyright notice, email templates, logos, and many other things. The first submission was used to optimize the journal process – giving the Juniors a new perspective about what is happening on the “other side” of a journal.

We strive to establish GAMMAS as a recognized journal for student research and are looking forward to new contributions. For more information about our journal or to read the article, please visit our homepage.

On the first day of the meeting, a small workshop was held for which each participant had prepared a short introductory presentation about the most important aspects and research questions of his/her academic field. The goal of each presentation was to provide an overview about the most significant concepts and goals of the respective field rather than discussing a single result in greater detail. This way, the participants were able to gain a basic understand- ing of each other’s research and to identify often surprising connections with their own work. Many GAMM Juniors particularly enjoyed the collaborative and informal atmosphere of the workshop, which will hopefully spark interdisciplinary cooperations and foster the academic exchange between mathematicians and engineers within the GAMM.

The two remaining days of the meeting were mostly devoted to reviewing past and organizing future events and activities. This included for instance the Young Researchers Meet Mentors (YAMM) lunch (formerly known as Young Academics in Applied Mathematics and Mechanics), which will bring together young researchers and experienced members of the academic community in an informal atmosphere for the third time at the GAMM annual meeting in Vienna in 2019. We also made significant progress towards the final version of the website of our new undergraduate research journal GAMM Archive for Students (GAMMAS), including the design of a new logo. We are proud that the first submission for the journal is currently in revision and hope that it will be the first of many articles to come. Another creative task carried out during the meeting was the design of a new logo for the GAMM Juniors. Based on a first draft made by Junior Philipp Morgenstern, we created a new version that will be presented soon. 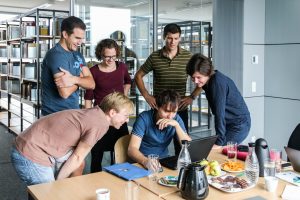 We are very grateful to Robert Martin for hosting the fall meeting and for organizing a very enjoyable social program. We also want to thank all participants for their contributions and for the good time we had together in Essen!